What is the “Axis of Evil”?

The Planck telescope is investigating the CMB (cosmic microwave background) radiation, and has come up with a confirmation of “The Axis of Evil”. 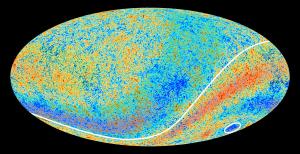 The blue spot in the bottom is a colder area than the rest. Red is hot, blue is cold.

It is called “The Axis of Evil” because a lot of physicists didn’t like what they saw, as it is quite unexplainable to them. They had hoped that the Planck satellite would find out that it was an error, but instead Planck confirmed the differences in temperature.

You might ask what this has to do with God and antimatter.

For now I will give you a short version.

I believe that electromagnetism was created before atoms, a reversed Big Bang.

Electromagnetism was in its creation instant, and has been slowed down to its speed today, 300.000 km/s

The Universe is much much bigger than we imagine. What we see as the CMB is just how much of the universe we can see with our telescopes today. Behind the CMB, also called the last scattering, there is a whole lot of more Universe. The same physical universe as we inhabit, but the electromagnetism from it, has not reached us.

The hot areas in the map indicates that the speed of light out there is higher than in the cold areas.

If I am right then the cold spot indicates where we should look, if we want to figure out where the center of the Universe might be.

If all these speculations is right, then maybe the rest of my theories also are true. My opinion is that our consciousness exists in separate mental parallel universes, and that you are your own God, in that Universe.

Pretty wild and exiting times for sure.

You are currently viewing the archives for April, 2013 at The Crestroyer Theory,.